Senior Member
Member
I ran into a guy at the hardware store while hauling my Massey loader, he said he had a nice one like it, showed me the pic below, and said he was hoping to get $3500 out of it. If I had the cash, it would be mine, but I don't so hopefully it's just what someone here wants! PM me for his number. 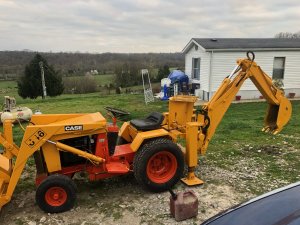 BTW, he said he was selling it because the backhoe was too strong for him, he was afraid he'd pull himself over with it!