Me and my auctions

Senior Member
Member
Do the auctions once or twice a week , more for something to do and always looking for that thing you just can't come without..
So I see this. 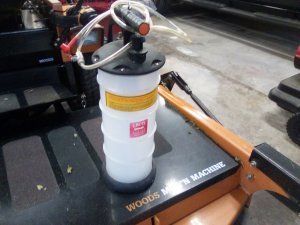 Oil extractor from Griots garage. Looked it up on line and seen a little more about it. New $109 (and it is like new) which seemed crazy so I bought at sale for $15. Might come in handy.

Staff member
Administrator
I bought one from HF and I love it! I'm sure you'll love this one too! And just $15!!!
D

Senior Member
Member
I miss the auctions we used to have around here.... especially a good old farm/tool sale.

Senior Member
Member
I’ve been looking at these I’m getting tired of tilting my Husqvarna push mower to drain the oil. Bill you got a heck of a deal on that one. Daniel I never thought about HF I’ll have to check that out.

Senior Member
Member
L D we use to have a neighborhood auction house the first Monday of the month. We got a lot of nice stuff. My wife liked the box lots for $1-$5. She won one for a dollar one time that had a whole bunch of Zippo lighters. I gave them to my Dad he collected them.

Sawdust said:
L D we use to have a neighborhood auction house the first Monday of the month. We got a lot of nice stuff. My wife liked the box lots for $1-$5. She won one for a dollar one time that had a whole bunch of Zippo lighters. I gave them to my Dad he collected them.
Click to expand...

They might do " box lots" a little different around here. "Some" auctions you bid on a table full of stuff but you're bidding on one item only at high bid. So that one thing you may be waiting for to come down can get grabbed by someone else. I'd sooner bid on what I want and be done with it.
J

Senior Member
Member
They do several things around here. One lot for one money. You’re either in or out like a normal bid.

They will also have a lot of the same thing and you’re bidding for the entire lot but by the piece. That one is a little deceptive if you don’t know that’s what is happening. That’s how a buddy of mine ended up with a pallet load of hurricane ties. He thought he was bidding on one box. Technically he was bidding on one box but had to buy the whole pallet at that price. Fortunately there was a builder there that talked to him and bought what my buddy didn’t want from him.

They also do a lot of the same thing and the high bidder gets the choice of how many they want at the bid times how many they want. If they don’t take them all, they offer the rest to anyone else that wants them at that price. The smart ones say no and they start bidding on what’s left. The second bidding round is usually cheaper.

Of course when something isn’t selling they bundle something else with it until someone bids. At that point you are buying the one thing you want and paying them to haul off their crap.

I don’t care for some of those tactics. What I really don’t like at auctions are buyer’s premiums.