Staff member
Moderator
The Bolens two stage snowblower that I adapted to use on my Iseki-built G152 doesn't throw snow very far. The paddles of the 2nd stage are beat up and worn. 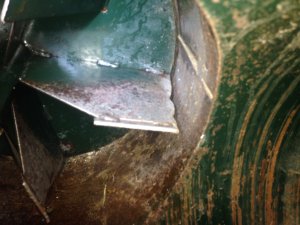 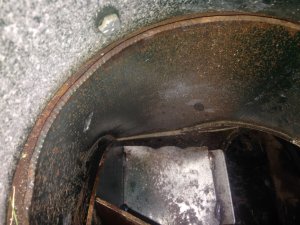 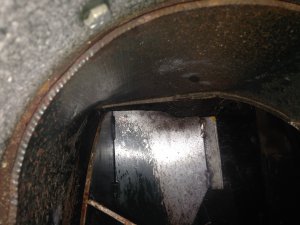 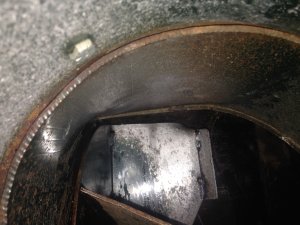 Staff member
Moderator
I've only used this blower once. It threw wet snow about 10'.

My plan is to put rubber belting on the ends of the paddles once I straighten them out a bit to get me thru this winter. Next year I will cut out the bent stuff and weld in new ends. 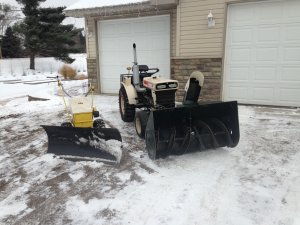 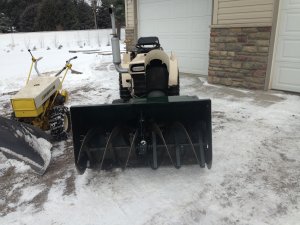 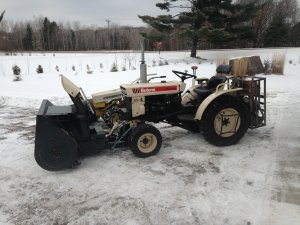 Staff member
Moderator
I got the first stage auger and gearbox out, but the second stage auger is stuck tight. The bolt stuck in it was the wrong size and it's a bit rusty. 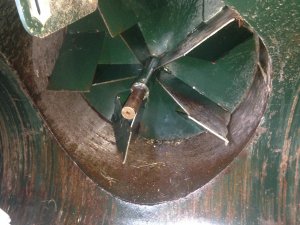 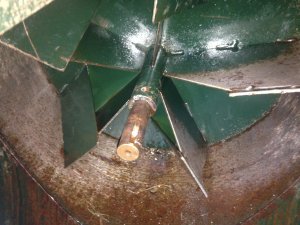 Staff member
Moderator
Current bright idea is I welded a puller to the second stage and just holding pressure on it. There is nothing in the parts diagram that would still be holding it.
I think? 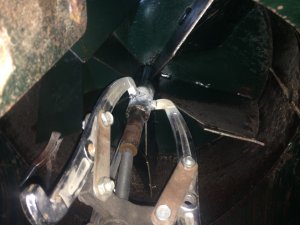 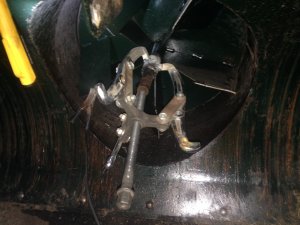 Staff member
Administrator
It doesn't look like the puller bolt and the shaft are parallel. May cause you problems getting very much pressure on it.

HorsesHogsandDeeres said:
It doesn't look like the puller bolt and the shaft are parallel. May cause you problems getting very much pressure on it.
Click to expand...

I snapped the pic with one arm left to weld on.

Just checked, it moved about 1/2" before one of my welds let go. Retry in the morning.

Staff member
Moderator
Senior Member
You would think the welds would help loosen it.

Staff member
Moderator
The parts breakdown shows both ends being keyed, but the manual is for the early models of the snowblower. Mine is a later model, there is a couple of minor differences. Main one being that the end I'm pulling on only has bolt through it, no key. And it probably shouldn't be a bolt, I think a shear bolt might be a better idea. Actually, there is four shear bolt locations on this thing, and not a single one in use.

Staff member
Moderator
Can you bolt or weld on pieces to the paddles without removing it?

dh1 said:
Can you bolt or weld on pieces to the paddles without removing it?
Click to expand...

Yep, I could go through the chute if absolutely necessary. But I won't be able to straighten the bent ends. (no snow in the forecast if this takes a few days)

Staff member
Administrator
When you get it apart, you'll see what was holding it.
Hopefully, no blind roll pin or something.

I have two similar 2 stage snowblowers. One throws 30 feet, the other 30 inches.
Major difference I see is speed. About a third more,it seems.

Staff member
Moderator
I caught myself considering unbolting the gearbox on the backside of the auger and prying there. That is when I decided to bolt everything back together. I will break out the extension bit tomorrow and go from the top to drill holes in eachpaddle to hold down the rubber belting. In the spring I will talk to my local small engine repair dude, Jim Bergstrom. He used to be a Bolens dealer, and his dad was before he was. This blower has a Bergstrom Tractor and Implement dealer tag on it, even. I will pick his brain and see if he remembers. Meanwhile, I will run it without the shear pin in it, to see if the 2nd stage auger will break loose from the shaft.

Staff member
Administrator
...break loose from the shaft, pack full of wet snow, and instantly turn into an inconvenient to use ice cube tray...

Senior Member
That looks like some heavy gauge metal on those paddles. I wonder what the PO was trying to throw.

Staff member
Moderator
The paddles are too bent up to do the rubber flap trick. The worst paddle is too uneven to hold the flap tight unless I put four bolts thru it.

I picked up some 5" wide 1/8" steel. I will weld 4" long pieces onto the end of each paddle to close up the gap, hopefully tomorrow.

Staff member
Moderator
Got the steel welded in and she is plugged in. Gonna give it whirl in a little bit.

Also got a new phone case, my Survivor case was shot. This one is heavier, it's the style that has little bolts clamping it together. 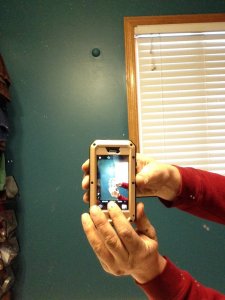