Guy at work gave me two Coleman 201 lanterns. He said he bought them in the mid '80s, and they've sat in his garage since the mid '90s. They are in excellent condition, one has some rust.

I actually have about half a gallon of fuel that the bottom hasn't rotted out of the can.

I first tried a pressure test on both, no go. Guess I'll have to poke around online and see if I can get some rebuild parts, I need to find a parts schematic to even know what I'm looking at/for.

Anyone have any expertise in this area?

Senior Member
Member
Squirt a little oil down in the pump to wet the leather to see if it will pump up pressure then.

Senior Member
Member
Did you close the pump knob before pumping?

Senior Member
Member
Nothing beats the smell of those naptha lanterns!!! That smells like camping.
D

Senior Member
Member
yup I have about 10 of them.

Senior Member
Member
All of the Coleman lantern parts are available online. Some sports stores carry the basic stuff such as filler plugs.

Staff member
Administrator
I still have one or 2 around myself. I haven't used one in years, but I can still smell them in my mind!
D

Senior Member
Member
every hardware store and dept store used to carry common parts. No more. Last year Bass Pro Shops had quite a bit for them, but I was up there 2x around Xmas and not any more.... Globes, mantles, plungers, generators for stoves and lanterns and more.... but any more, I I had to buy a stock pile from FeeBay last fall when I was playing with a couple of mine.... were lucky we can still get white gas (Coleman fuel) anywhere around here...

3-4 years ago I was in Branson, Mo. (only time I have ever been there) and there was a "Coleman store"
I never realized just how much outdoor gear Coleman had their name on!!! More repair parts than I have seen in one place (but 8 hours from here)
I occasionally go to a Colemen website, they talk of "factory refurbishment" of lanterns and stoves if you send them back to the factory, and as I remember it's fairly cheap. This place had that available on site as well.... (may have been a mail in thing to factory, I didn't check into it)

Yes, we drop in that store every year. Tons of camping gear.

olcowhand said:
Yes, we drop in that store every year. Tons of camping gear.
Click to expand...

Senior Member
Member
We have a Coleman store in Toronto which is only an hour and half from me. We camp a few times every year and I love it.
Now, we have converted lanterns to propane, those 1lb disposable cans to screw in the bottom, makes it very convenient. Although we have a trailer for camping with and do only provincial parks with it (many times no power), we use a lot of Coleman gear.

Senior Member
Member
I doubt that this is a 201, but it's still my emergency light if the power goes out. I know it is at least 50 years old, still works great. I fire it up every fall in case of a blizzard as well as the Coleman stove.

It's pretty amazing that the "white gas naptha" Coleman fuel stays fresh for decades, and gasoline can spoil in a gas can in a matter of months! 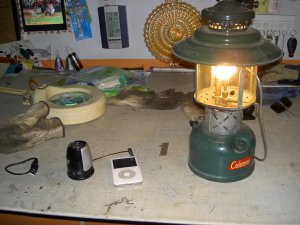 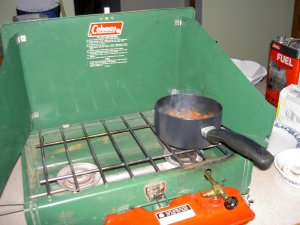 Senior Member
Member
I need dig out dads lantern and camp stove. I'm not even sure where it is in my mess of boxes and crap. He would of bought them in the 70s. He gave them to me years ago. I used them a few times.

Neat items but I never camp or have any call to use them.

Senior Member
Member
I have a single burner Coleman stove people left behind at site. They had lost the filler plug and tried using cloth to plug hole,,,well cloth won’t hold pressure. Bought plug in town
this is my 20 year old Coleman tent. Used for over nighter this summer, still excellent

Senior Member
Member
Well I have had all of my lanterns out and lit last week except for 2. One is fighting me, being a PITA, don't wanna light. About a year and a half ago I played with it and no success so I put it aside. Just tried it again last week and it would light and die. Light and die. So I have it all the way apart this time. Previously I had replaced the generator tube, the packing on the valve nut and the leather pump cup.
This is the 1st time I've had a valve unscrewed from the tank, this one was sooted/carboned up at the very bottom
I put it thru the ultrasonic cleaner and that cleaned it right up. I ordered a new filler cap since I borrowed the one that came from it for another that had a bad oring seal and a new check valve along with the tool to R&R the check valves from feebay just in case.
Those won't go to waste, I have 2 stoves that are being a b*tch too
The lantern I am having a hard time with is a 200A, red and single mantel. The other one I didn't light up (and never tried to light that one) is from 1973 and I don't think it has ever had fuel in it or been lit since new.
In the last 2 weeks I have come up with 3 more bringing my total to 13.
One was my dad's, he bought new and judging by the date on the bottom we only ever went on 1 more campout after that. It's been hanging up in mom's garage ever since. I last lit that one in (probably) the late 80s well I oiled up the pump, tied new mantels on and it took right off. This one is a 275 from 1981
It's brown, most on the Coleman site called them turds because of the color. I now have 2 of those.

I went garage sale-ing right after that and was looking at 2 that this guy had, picked up 1 of them and he says" give me what I have marked on that one and take em both"
And he then gave me 2Dietz kerosene ones before I left that look like they never been lit
I guess that means I have 15 lanterns counting those.
D

Senior Member
Member
I remember a couple more besides those that seem to be MIA, among those a blue Sears one which were made by Coleman. I do have an avocado colored Sears one that is accounted for
You must log in or register to reply here.
Share:
Facebook Twitter Reddit Pinterest Tumblr Email Link
Top