Senior Member
Member
Had some issues with the gas boiler a couple of weeks ago. It wouldn't fire for some reason; everything looked good; the thermostats were calling for heat; the vent opened, but the vent's fan never kicked on, so the boiler never fired. Some wriggling of the Honeywell Aquastat Relay suddenly made the fan turn on.
Okay, problem solved....or so I thought.

On Friday it stopped working again. With the temps in the low teens (F), it soon got cold!

Some more troubleshooting.....I reckon the circuit board has a bad trace. Was contemplating pulling it apart and re-soldering it, when I saw the manufacturing date of the boiler: 2003. 17 years?
Hmm, maybe I should replace the whole relays. Better be safe than fiddling with this unit. Ordered a new one from SupplyHouse; gets here tomorrow.

In the meantime this is my extensive, professional fix using a pair of cheap HF scissors, until I replace the complete relay tomorrow : 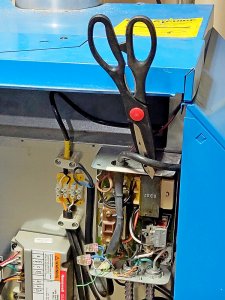 Senior Member
Member
Had two of those fail in the last 25 years or so.
Not necessarily cheap either.
P

4getgto said:
Had two of those fail in the last 25 years or so.
Not necessarily cheap either.
Click to expand...

Yeah, no kidding! I found the new one on SupplyHouse for ~$210.00 incl. shipping, which is apparently a VERY good price. It's a very specific model too, JUST for this brand and model of boiler!

Anyway, it's all installed as of yesterday afternoon, and the scissors holding the connector just in the right place are therefore no longer needed!

Senior Member
Member
Don't have a boiler but gas forced air furnace, 1982 vintage. Put a new AC unit in (Insurance) 3 years ago. I would like to keep this unit for AC only. Remove everything else. Install a new gas furnace in the basement using the same heat runs. Haven't figured out how to keep the two units air separated. Damper of some type.
P

Senior Member
Member
Why do you have to separate them? You mean, so they don't draw each others' opposing temperature air in?

Senior Member
Member
They would sit one over the other. Mainly for access to gas line and duct work. Original one main floor for AC and the new unit in the basement right under the upstairs unit. When the heat was on it would push the air straight up through the AC coils and out into the room. Opposite when the AC was on. Just thinking ahead on this and haven't talked to anyone yet. They would be independently controlled, separate thermostats. May not need to separate them, don't know. Not an HVAC Tech.
You must log in or register to reply here.
Share:
Facebook Twitter Reddit Pinterest Tumblr Email Link
Top