Propane1 said:
That system would not of had synthetic oil in it when it was new. So will it make any difference. ? I know absolutely nothing thing about synthetic oils. Never used them. Why would you use synthetic instead of normal oil. ? Just a wondering.

KennyP said:
I haven't a clue either, but hard to find regular oil that thin. Pump seems to like it so far.
Click to expand...

I have heard that non-synthetic (dino) oil has been hard to find in parts of the country, and when it is available, it's more expensive than synthetic. Around here that isn't the case, fortunately, sounds like dino oil is available in PEI with no problem, then Noel? I run synthetic in the '06 Denali. My wife's '21 Equinox is still under warranty so it will stay synthetic long as we have it too. Just an example of a synthetic oil advantage was, back around 1996 we decided to switch oils in the engine of our dirt track race car. Went from Kendall 20-50 to Amsoil 20-50. Next night out the engine ran 20 degrees cooler! We stayed with synthetic from then on. Now in a couple of street vehicles we had, didn't get good results switching to Amsoil. Worst was the 1995 Camry we had. It started leaking oil and would lose oil pressure at certain RPMs after around 1000 miles on an oil change. Dino oil went back in that! Wife also had a 2008 Chrysler mini van for awhile. I was sick for a good amount of time while we had it. Had my brother in law change oil and he put Amsoil in it. Started using a quart every 1000 miles. Traded it off while I was still recovering.

Even though I use dino oil in the tractors and old trucks, I'm not against it at all. Just keep using the type of oil that has been in them as I don't know what switching may do, besides the deal with the Camry and Chrysler. I forget what they called the mini vans.

Sure can't see a reason why the 5-20 synthetic would hurt anything, so keep us posted on how it works, Kenny!

Staff member
Administrator
My uncle who I do his repairs said after I switched him to synthetic oil in his zero turn that he never has to add ANY oil between changes now. Made him a believer! But I have trouble finding 10w40 in full synthetic. But don't use that grade often anyways.

Senior Member
Member
My vehicles say right on them synthetic only.

My ranger still gets Dino oil. Has all the vitamins and nutrients in it.

Staff member
Moderator
Senior Member
It's still amongst the living! But the cylinder had some 30W Dino in it!

Staff member
Moderator
Senior Member
I did put the blade I got with the 104 on it yesterday. It can be angled 15 or 30 degrees either way, plus be turned 180 degrees. 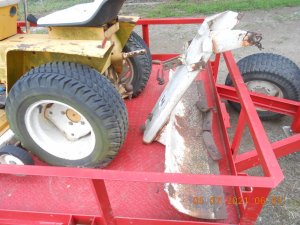 Staff member
Moderator
Senior Member
Wanted to get you guys some pics but the rain showers are messing with me! This is the first tractor I paid money for, so has a spot for a while here!

Senior Member
Member
Sorry to be on the type of oil to use in the Cub Cadet 104 hydraulic system. But was still wondering. Found a manual for the hydraulic system in that tractor. You maybe have this any way Kenny. 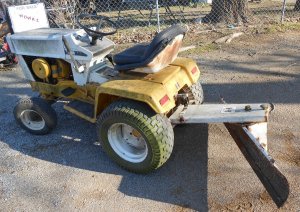 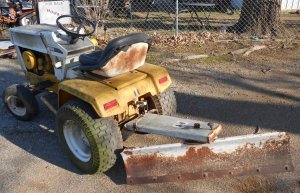 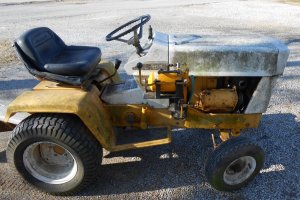 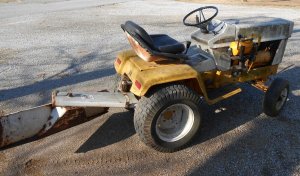 Senior Member
Member
Yeah, like Noel said, my kind of tractor too! Let us see pics when it gets put to work!

Can the blade be angled while sitting on the tractor, Kenny?

Senior Member
Member
I wish I had a dollar for every hour I spent in the seat of a 1xx series cub tractor....

Those are my favorite GT.

MFDAC said:
Yeah, like Noel said, my kind of tractor too! Let us see pics when it gets put to work!

Can the blade be angled while sitting on the tractor, Kenny?

Nope! Locking pin is at the rear end of the blade and just have enough clearance with the 23X10.50"s on it.

Senior Member
Member
Bet it will work nice with hydraulic control. I can see where that will handy. You'll have the nicest driveway on the block..!

Staff member
Moderator
Senior Member
Took the blade apart at the pivot. Wire wheeled the crud away on both surfaces and put a layer of grease on there! Rotates real nice now!

Staff member
Moderator
Senior Member
Used the Cub and Blade today to work down some of the drifts. Started easily and did a great job!

KennyP said:
Used the Cub and Blade today to work down some of the drifts. Started easily and did a great job!
Click to expand...

Senior Member
Member
Glad you were able to do some snow removal with that Cub, Kenny! Sounded like it was kind of rough down your way!