Senior Member
Member
Today was dry and windy but cooler. Three of the Grandkids were here so we put them to work picking up spuds. Used the Mitsubishi tractor with a modified middle buster to dig them with. Works good and all the kids have to do is pick them up and put them in the spud truck. Five rows filled filled the box and family has been digging fresh spuds for a couple months now. Got them sorted, washed and drying. In a couple days we will bag them.

Senior Member
Member
I finished digging our 25' row of Sweet Potatoes the other day. Very poor crop. Hardly got a 3 gal pail full off that 25' row and should have had a 5 gal bucket full. Enough for use but no give aways this year.

Senior Member
Member
I’m doing the same thing this week Chris. Sorting and bagging and storing. I’ve got about 300 lbs to go thru. About how much did you get. ?

Senior Member
Member
I didn't weigh anything but will try to remember as we bag them.
Going to try and add photos but just reset the computer last night and things aren't going well. Can't save photos from emails and when using a USB cord the computer won't open the photos after it finds them so bare with me.

Senior Member
Member
Make three passes down each row. This was not quite half way done. 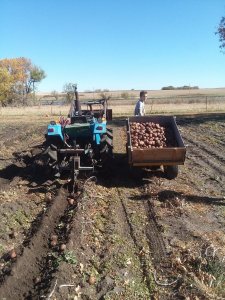 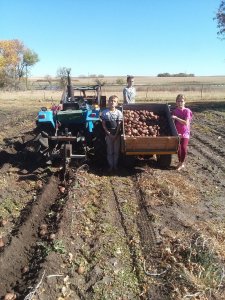 Senior Member
Member
Where to you guys store you potatoes to keep into the winter?

Senior Member
Member
I have a wooden tool box my dad had in the back of his truck. I can get about 100 lbs in it. I put a little top soil in the bottom. When I fill it with potatoes, I leave it open a little for a few weeks to dry the potatoes. Then close the cover. This box is in my garage which I heat during the day, if I’m out there. Rest of the time it’s kept at 47 degrees F. The potato box is next to the man door and is as far as it can get from the wood stove. And it’s on a outside wall. Never had a bad potato. The blue potatoes tored last year were still just as good and hard as when I put them the tool box. They were put in at the end of September and took out in the end of May the next year. Some were soft, but most were hard. Could have cooked instead of using them for seed.

The rest are hug in burlap sacks or onion type bags for ventilation, in my sister in laws clay basement. Cool and dark. Never had a bad potato there either.
Dry, cool and very dark is my thinking. Works for me. I don’t wash mine, I leave the dirt on them. Better for storing, they say.

Senior Member
Member
The front shop is kept at about 40 to 45 degs. during the winter. After picking we wash and then spread the potatoes out on cardboard on the garage floor to dry. Then we put them in burlap bags that hold about 10 lbs. and place them under the work benches in that shop. They usually don't start to sprout until late May or later.
I think we are going to place some in the crawl space under the kitchen this year to see how they keep.

Senior Member
Member
I think before next years harvest a better digger may be in order. Betting we may still be leaving some behind.

Senior Member
Member
Automatic planting Chris. They will grow next year. I got 10 lbs of blue potatoes out of two plants this year. I didn’t plant those this year. They were missed last year and stayed in the ground over winter. Had one potato at home this year too. Happens to me every year. Left in the ground, sprout up the next year.

Cvans said:
I think before next years harvest a better digger may be in order. Betting we may still be leaving some behind.
Click to expand...

Chris, when we were on the farm many years ago and raised a lot of spuds we had a shaker type potato digger. I worked real well but would need fairly mellow ground to pull it with a GT. Your tractor should have no problem with it if you can find one usable.

Only place that don't freeze is our basement that is heated to around 60° F . used as a rec room, shop and granddaughters TV/play room and that is to warm. Have a basement under an old house we want to tear down that don't freeze but not close to rodent proof either.

chieffan said:
Only place that don't freeze is our basement that is heated to around 60° F .
Click to expand...

It can be hard to find a place that's good to store spuds. The crawl space under the kitchen is a newer addition and the foundation is insulated. I've never monitored the temperature down there but the waterpipes have never froze so it might be a good place and there's lots of room. I'm running out of room in the shop and we planted more this year.
You must log in or register to reply here.
Share:
Facebook Twitter Reddit Pinterest Tumblr Email Link
Top