Senior Member
Member
may be bringing this home early next week, cant find any info on it.... I took the numbers down from it, but left them in the truck..... model number was 20XXXX and code number tells me it was built in 1972. I can't find anything on any Briggs with a model number starting with "20". Definitely Briggs, looks ALOT like a 320000 series 16hp but obviously slightly smaller.

Senior Member
Member
ok went out to truck, got my cardboard scrap with the numbers wrote on it... 200401 0190-01 7208151 it's on a Binks air compressor, looks way overbuilt, about 15 gallon tank, compressor unit almost as huge as the engine, think its a single stage hope I copied them right, not been run in years but don't think it ever spent a night outside.
D

Senior Member
Member
huh according to that list that Kenny showed, a 201400 is a single cyl Vanguard OHV... this is definitely cast iron L head. Vanguards were not even thought of yet in 1972..... I'm guessing it's either a 9 series or a 14 series..... flojet carb, looks like magna matic point cover....

Senior Member
Member
Since you aren't sure, just ship it to me, I'll figure it out

Senior Member
Member
Won't be able to see it til Monday to recheck the numbers,
D

unloaded it from the bed of my truck and wrapped the rope around the pulley, gave it a shot of starting fluid and pulled the rope, no fire.... have to check the points. Its definitely a cast iron Briggs/Magnamatic points ignition. part of engine decal still there, bottom half of number missing, the "HP" part of decal is still there, I'm thinking it's a 9. Could be an "8" but I don't think they made an 8hp cast iron.
How fast do I have to roll this thing over to get spark? It pulls over stiff, couldn't get any free wheeling out of it once the knot in the rope cleared the pulley..... IDK what oil is in it, didn't check, might be something heavy, and the ride it had in the bed of the truck was rather chilly.... maybe itll roll over easier today as its been in the garage over nite…. might have to pull belt to compressor for now to see if I can get some velocity on the starter rope.... IDK if this engine has compression release.... acts like it doesn't. I remember starting a 16hp Briggs cast iron several years ago, seems like it took a lot to spin that one over, too....... but I don't remember it taking THIS much effort.....

Senior Member
Member
Pictures of it.
I have a 10 hp cast iron Briggs in my shop.

Senior Member
Member
I just sold an 8hp Briggs the other day. It used to be in the MF8E. Pretty sure it was aluminum like you say, Dodge Trucker, as it didn't hurt too bad to take it off a shelf and load it in the pickup. I've got another one in a shed that's still in a very old MTD. Too crappy of weather to go check numbers and stuff on it.

I'm betting that the compressor pump may be the most resistance. Pull the spark plug and see how easy it spins.

Staff member
Moderator
Senior Member
I have a 16 HP Cast Iron engine but it's electric start! 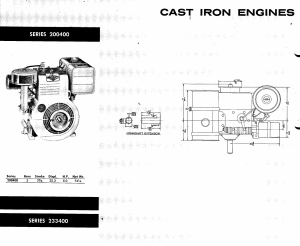 Yup that's what I have. Where'd you find that? Anything that I can find on a Briggs 20xxxx says it's a vanguard aluminum which this definitely ain't.
D

Member
One of my Briggs manuals 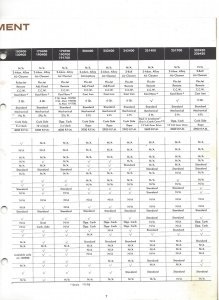 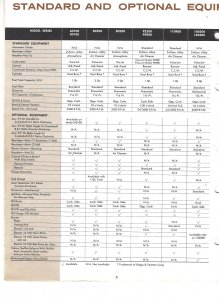 Senior Member
Member
Just for entertainment sake, this is what I have on my bench with stuff piled on and around it. Had to move a few things to get the pictures. Hehe.
It has a starter/generator. But you can take the belt off and put a rope on to start it too. Check out the oils it can use.

Senior Member
Member
Well with a new plug and a cleaning and adjustment to the points (which look like brand new) it runs. No smoke. Really smooth. I did loosen up the mount bolts on the engine so I could remove the belts leading to the compressor. Didn't pull over much easier without the compressor drag. Once it fired on ether it did seem to pull over a little easier. The fuel tank was bone dry, but the glass bowl was full of gas that didn't look terribly old before I added to it. As soon as I put gas in it gas started pouring out of the carb. I shut the valve on the filter bowl, but apparently not all the way I took the air filter elbow off so I could see if I had the choke on or off, as soon as I opened it the engine started right up.

I didn't think it would run long, being that I thought the gas was shut off. Well the shut off was hard to turn, got on it with pliers and I guess it wasn't all the way off. It continued to run longer than I thought it would, I pulled the line off the carb, and gas was still pouring out. And it broke off at the other end where it hooked to the glass bowl. And poured out some more. I did finally get it shut off, I think that fuel line was original from 1972, it snapped like a dry tree branch. So now I need to find a parts lookup that doesn't think I'm dealing with a vanguard so I can find a carb kit. (Can anyone help me with this?) It then ran with the gas really shut off until I hit the ground tab and shorted out the coil/plug.
The oil in both the engine and compressor looks clean and brand new.
The tag and stickers on the tank say it's a Binks (the paint gun company) compressor, there is a tag on the compressor that says the same thing, but I see on the unloader valve where it's marked 'Quincy compressor company". It definitely looks like a Quincy unit, huge overbuilt single stage.
When I first saw it I was thinking this might make a good unit for my kid, so I can get my gas powered compressor back from his garage. It's clumbsy, awkward and sort of unwieldy to roll around, more so than mine. Now I'm thinking it might be better to leave at John's farm where I store my junk. Cuz usually I leave my other one there til I need it or the kid does.... there's no electricity in my storage barn. But having compressed air out there when I go, is invaluable. And let my kid store my other gas compressor. It's closer there than John's farm, for when I do need portable air/ and a little less of a handful to move around.
D