Senior Member
Member
Thought I would make a separate thread for the recently acquired 1969 Ford Falcon Futura wagon that I have mentioned elsewhere.
First, here’s a link to a past auction ad and what it used to look like:
Buy new No Reserve 1969 Ford Falcon Wagon Supercharged Grocery Getter in Bonney Lake, Washington, United States

The through-the-hood engine has been replaced with a high-performance 302, headers, dual exhaust. Still has the mentioned TCI Sizzler C4 transmission and torque converter and Detroit locker. The transmission has a really strong shift from 1st to 2nd, but smooths our nicely if you mash the gas pedal to the floor....

I will make some updates here soon.... gotta go help my FIL with what will hopefully be his LAST garage sale.
Last edited: Jun 14, 2019

Senior Member
Member
Nice!!!!!! tail lites are reicent of a 65/66 Fairlaine.
wish I could have seen what was sticking out of the hood better.

Senior Member
Member
Needed to post this here to keep a running chronology.... from this past Saturday:

Had a chance to finish a project on our 1969 Ford Falcon wagon..... in it’s history of engine swaps the windshield washer system had been removed completely. It only had a generic expansion tank for the radiator. I removed that tank and installed a combination washer reservoir/radiator overflow tank that I got from a local You-Pull-It yard (it is a part that is common on Ford pickups from the 80’s to mid 90’s) and installed a washer nozzle kit. Luckily, a previous owner had tied back the washer pump connector in the engine compartment.... same connector that the new tank needed!)
Now the awesome Falcon has a windshield washer system again!
One project down, 101 to go! 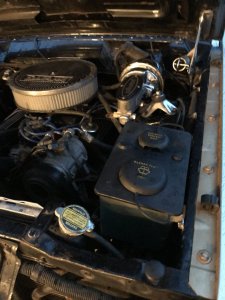 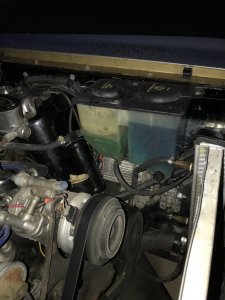 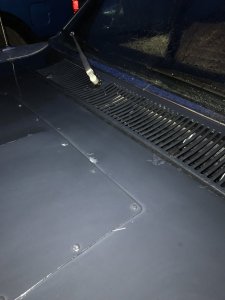 Senior Member
Member
I see it has AC too.

Senior Member
Member
Yes! Currently has bubbles in the sight glass....that is my next project.... get my friends at Straightline Automotive to check it out. Hopefully just needs a charge.

Senior Member
Member
Tinted glass all the way around, by the look of the pictures in ad, which normally indicated a air conditioned vehicle, back then. Thats nice. Helped keep the heat down some inside the car. What hp does it have now ? Still get to the grocery store fairly quick, I'd say. Can't really say I liked the stuff out the engine bonnet. But thats just me.

Senior Member
Member
Not sure of the HP, don’t really care. All I know is that it has some power and sounds awesome. I will eventually get the side and rear windows tinted darker, and get a strip of tint across the top edge of the front windshield.

Staff member
Administrator
Man, that's one cool car for sure!!

Are you going to find a stock hood for it or leave the hood scope?

Senior Member
Member
I dig the long roofs Paul, even Fords---Just kidding----LOL! That's a victory in itself getting working washers! Several years ago I converted my '55 GMC to electric wipers from vacuum and added washers while I was going through that. All the parts except the spray nozzles came from a 1997 Dodge Caravan sitting in the back yard, and a bottle and bracket from my pile of '70-'72 GMC parts. It definitely felt like a win when it all actually worked!

Texas Horses Hogs and Deeres said:
Man, that's one cool car for sure!!

Are you going to find a stock hood for it or leave the hood scope?
Click to expand...

I’ll leave the hood as-is. Might paint the black area with some paint I have.

alleyyooper said:
I see it has AC too.

Yes, it does. I might take it to my local shop tomorrow to service that system. It’s getting pretty warm during the day now, and I would like to have the AC working before getting the windows tinted.

Senior Member
Member
is it set up for the old R 12 or been changed over to R134?
Having Air on a hot summer day drive is nice.

alleyyooper said:
is it set up for the old R 12 or been changed over to R134?
Having Air on a hot summer day drive is nice.

From the size of the fittings, it appears to have been changed over to R134.

Senior Member
Member
Great news! AC system IS R134, AND is intact.... all it needed was a charge! Works great!
The radiator shroud is missing.... I have the one I removed from our 1981 Bronco stored in the attic. I will try that one to see if it will work on this one.... there’s a good chance it will.

Senior Member
Member
The previous owner told me that there was some kind of problem with the wiring on the back side of the ignition switch. Once in awhile, I would have to reach my fingers behind the lower edge of the dash near the key switch and put pressure on the connector and wire bundle to get the car to start.
Earlier today, I was about a block from the house and the car just died and would not start. After messing with that connector, I got it to start and got the car home. Took the connector loose and removed the key switch from the dash. Found that a previous owner had tried to half-a$$ed "fix" it by using a combination of cable ties and hot glue (!!!!!).
Cleaned all of that up and could make the problem come and go. Found that the round female connectors on the end of each of the wires in that cable bundle were basically loose. So, I removed each wire, one at a time, and compressed those connectors so they would make better contact with each pin they engage. Good and tight now. Took about 5 hours to fix it properly.

If it ever fails again, I will be very surprised.

Senior Member
Member
Good it worked out for you and was able to fix it with out throwing money at it.

Now if I could have gotten the AC fixed on our Buick with just a recharge.

alleyyooper said:
Good it worked out for you and was able to fix it with out throwing money at it.

Now if I could have gotten the AC fixed on our Buick with just a recharge.

The day after the good news about the AC on the Falcon, the AC on the 1981 Bronco died. We got in it to go to church Wednesday evening and the AC kept cycling on/off way too quickly. I knew it had issues a month or so ago: had it serviced and they had to add refrigerant, also added dye. Ended up being a leaky compressor. So, I ordered a new one and a new drier from RockAuto with next day delivery (about $325.... not bad!!!), received it Friday before supper. Installed it yesterday and will take it this morning to finish the process.

I’m just glad I can do most of the labor!

Senior Member
Member
All good now on the Bronco.... 60 degrees out of the vents. Not bad!

Senior Member
Member
Well, that lasted all of a couple of days! Long story short: the high-side hose between the compressor and the condenser was leaking through the body of the hose. None available ready-made, so my local Bumper to Bumper store made one for me.... $34 out the door! Also in the mean time, I have replaced everything in the Bronco's AC system. Now it is ready, again, to see if it will hold a vacuum, then recharge. I hope to get that done next week.
Last edited: Jul 18, 2019
You must log in or register to reply here.
Share:
Facebook Twitter Reddit Pinterest Tumblr Email Link
Top